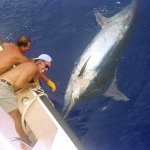 When trying to land that trophy marlin or, if you are ambitious enough, a thousand-pounder, you need all the information and help that you could find. When trying to catch the marlin of your dreams, try using these lures.

What is so great about the Mold Craft Wide Range is that it can be used in a wide range (thus its name) of conditions and speed. Thus, it is a favorite among anglers who want to land the big fish because it can be used in rough waters. This feature is accomplished by the center hole and squared-off nose.

The Pakula Lumo Sprocket was designed mostly as a straight runner and has a very tight swimming action. Lures by Pakula were first marketed in Hawaii for many years before these were sold in Australia, then, and the rest of the world.

One of the lures you really must have, the Mold Craft Super Chugger has a concave face that enables it to grab a gulp of air which it then lets out in a thick bubble stream. This lure also moves in a side-to-side wiggle so that it resembles the swimming movement of fish.

The Joe Yee Super Plunger is among the most popular and most widely used plungers, worldwide. A favorite by many anglers, these lures have caught their fair share of thousand-pound marlins.

Another favorite among anglers, the Marlin Magic Ruckus is among the most productive lures used for catching marlin.